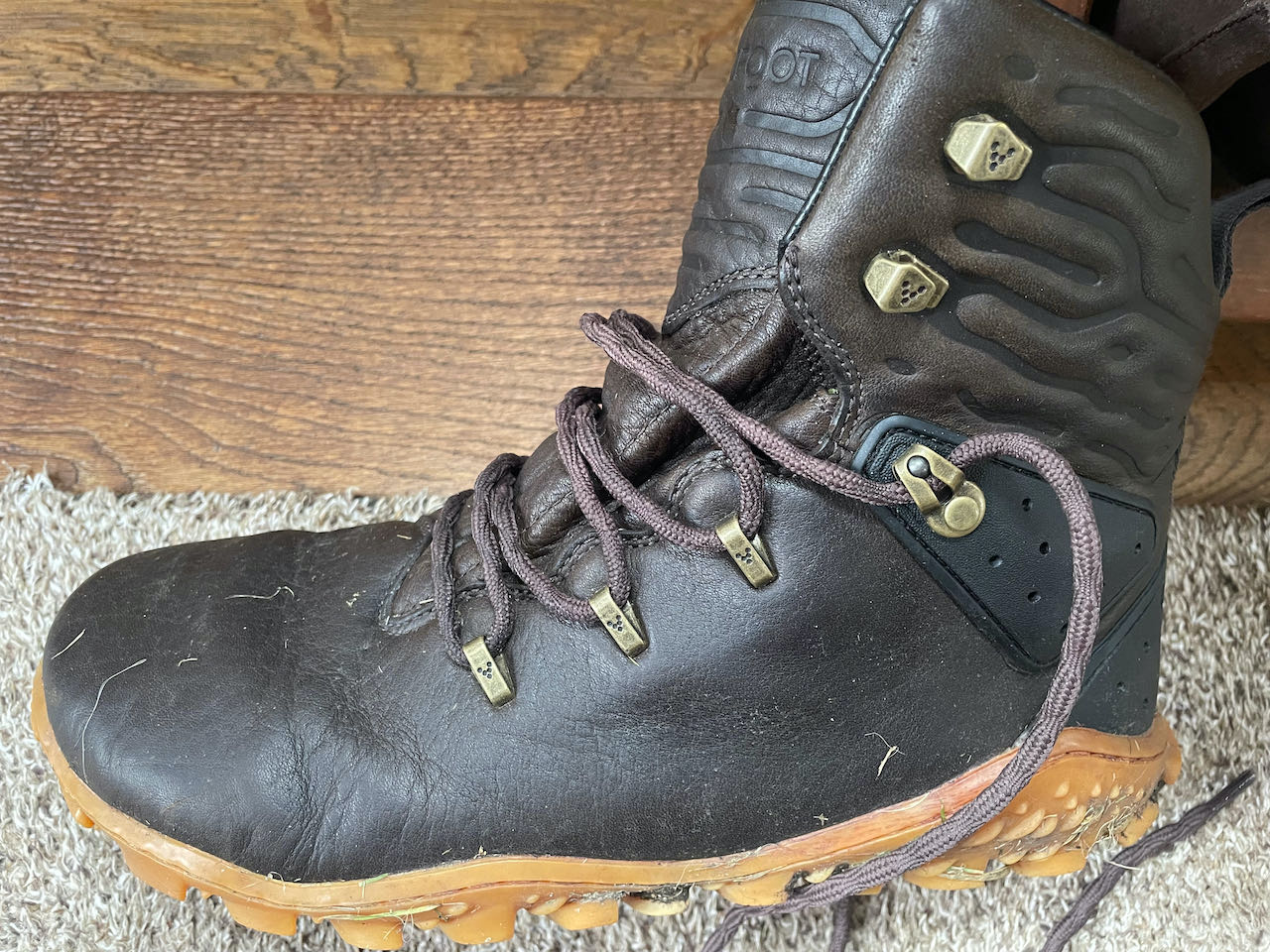 I have a love-hate relationship with Vivo. How this came about is a long story. Are you sitting comfortably? Firstly, this is the first review I’ve done in a hundred years. I don’t do many reviews any more because I don’t buy that much kit now and there are currently too many ‘experts’ out there!

I know about boots – not just because I’m ex-military but because I’m an ex-military Physical Training Instructor (PTI.) It was my job to train people to prevent injuries in tough environments. Contrary to popular belief a PTI’s job was to make people ‘fit to fight’ and not to half kill them during training. There’s no point ‘beasting’ people to death and ruining the things they rely on to fight and survive – basically yer ‘plates-of-meat’. Back in the day we didn’t have too much of a chance. The boots were DMS (direct-moulded sole) heavy as a heavy thing and caused no end of issues. We came back from the Falkland’s conflict with similar foot problems to the First World War – namely trench-foot, so it hadn’t improved in nearly 75 years. Water went in but didn’t come out. It was time that someone did something about it. And a small revolution began about how to look after feet and how to look after the things that the feet sat in. I left the forces before the full force of the impact was introduced but at least we had started to teach people how to look after their feet and boots.

During my excursions into tracking and bushcraft I always wanted a decent tracker boot. I maintain that for good fieldcraft and stalking you have to be in contact and feel the forest floor almost gliding through the landscape. I’m not a hiker and I don’t do miles and miles of ‘yomping’ – a Falklands conflict term for speed-marching miles and miles through the landscape. I tried and quickly dismissed huge Frankenstein-looking, new-style military boots. All that was missing was the steel toe-cap! I thought I had found the holy grail when I came across Roger Harrington’s tracker boot now called the Bison Woodland Boot. These are still available with or without heel. They were great but the sole quickly came away which was replaced by Roger but it became a bit of an issue.

Cut to 2013 or near-abouts and one of our course participants was a guy named Lee Saxby. We shared similar interests not only in woodcraft and tracking but also as ex-PTIs. He was ex-RAF but I didn’t hold that against him. He said he was now a bio-tech consultant for a new company making barefoot shoes called Vivo. We muttered and murmured around the fire talking anatomy and physiology and would we like to trial some new boots? Yes please! You’re damn right we would!

On the next course he brought a car boot-full of Vivo trackers (version 1) and asked us to try them out – throw them around, stand in puddles and do reviews. They were great! Light-weight, waterproof, no heel, and as comfortable as slippers. We did a video promotion (somewhere on YouFaceTwit) and became ambassadors before the term became fashionable. We were sold and we promoted them to death. Until… yes.. until they started falling to pieces. Speed hooks failed, soles came away, stitching split and waterproofing became – ummm… unwaterproof! Everyone we recommended the boot to came back wanting blood. Vivo’s replacement bill must have been astronomical. We recommended a number of improvements. Lee left Vivo and we never heard from them again.

Even so my love affair with Vivo continued. I bought the excellent Ultras, a super—lightweight aqua shoe which are never off my feet from May to October (even in the woods) and I have even bought some casual moccasins and ‘desert wellies’ (Gobi) and a seemingly extinct pair of Snow Trackers from Revivo. (Look up Revivo and you may get a reconditioned pair of Vivo shoes or boots at a reasonable price.) All good so far. I then took the plunge and bought (yes, bought) the next iteration of the Trackers FG (firm ground.) And… ‘Quel suprise!!’ (a French exclamation.) All our recommendations for improvements to the original were incorporated in the new boot. Thanks for the acknowledgement Mr Vivo! At least I knew they were going to be good… or… were they?

The new tracker was heavily criticised… again. The sole was still glued and not stitched. The manufacturing problems continued and it fell to bits. Well – it seemed everybody’s fell to bits except mine. Mine were fine – they still are. I remember one unhappy customer taking a picture of the boot and posting on social media. I stupidly said he needed to look after his boots – and promptly received a torrent of abuse. Serves me right for knowing what I’m talking about! As I said, I’m no long-distance hiker but queue my original comment of knowing how to look after your kit. Clean, polish, dubbin, clean again. Your knife maybe your life but you still might have to walk out. My glistening, clean, tracker boots remain pristine. But, yes, there was still some manufacturing issues.

Then I spotted the Vivo Tracker Forest ESC. Aha! What’s all this then? Vivo Tracker FGs are what it says on the tin, designed for firm ground. They have a tendency to slip on wet surfaces and they aren’t the warmest of boot. They allow you to move in a barefoot way (please note: for those who think it’s the boot or the shoe that gives it the barefoot monika – it’s not; It’s the way you move (See Lee’s site https://www.leesaxby.com)) Don’t think those ridiculous Vibram 5-fingered things make you a barefoot aficionado. Freet aren’t much better in my humble opinion. Yes, I’ve tried them all. It took me quite a few years to re-learn how to walk properly with a ‘barefoot’ style. Look at the San and how they walk/run. That may give you a clue. Anyway… I was tempted. A quick look at the stitching on the image was enough proof for me to part with another whack of dosh from my well-earned army pension and become a fully paid up Vivo shareholder – or so it seemed.

Seven paragraphs later and the review starts. They’re OK. The tread is designed by Michelin (isn’t that a French firm?) – a collaboration. This is where the trademark ‘ESC’ (Escape) comes from. And there’s me thinking it was a keyboard function. The soles are aggressive and designed for soft-ground. If you are expecting that nice contact with the woodland floor á la Tracker FG – forget it! These are serious soles which make the boot seriously heavy compared to the Tracker FG – but not so seriously heavy compared to a normal hiking boot, Salomon GTX’s for example. The new Vivos are flat soled with no heel as you would expect from a Vivo boot. And they are not water-proof. They have no waterproof membrane. But you get a free tin of leather balm. So that’s ok then, right?  Maybe Vivo saw people’s posts about how not to look after boots and felt sorry for them. There’s even a blog post about how to ‘Prepare to Escape.’ In other words how to look after your boots! There’s even a pic of Ben McNutt cleaning his Vivos to emphasise the point. The marketing images show that you can bend the boots up into a tight ball – which apparently shows how flexible they are. So… we’re on to a winner here. Not waterproof, heavier but they can bend. No – I’m not being sarcastic – just realistic. Do you need waterproof boots? No. You need to let the water out which didn’t happen in WW1 or the Falklands. You always, always, always need three pairs of socks either on weekends or large expeditions. It matters not how long. One pair potentially wet, one pair drying and one pair always dry. You also need to let your feet breath and move, which the Forest Tracker boots allow. 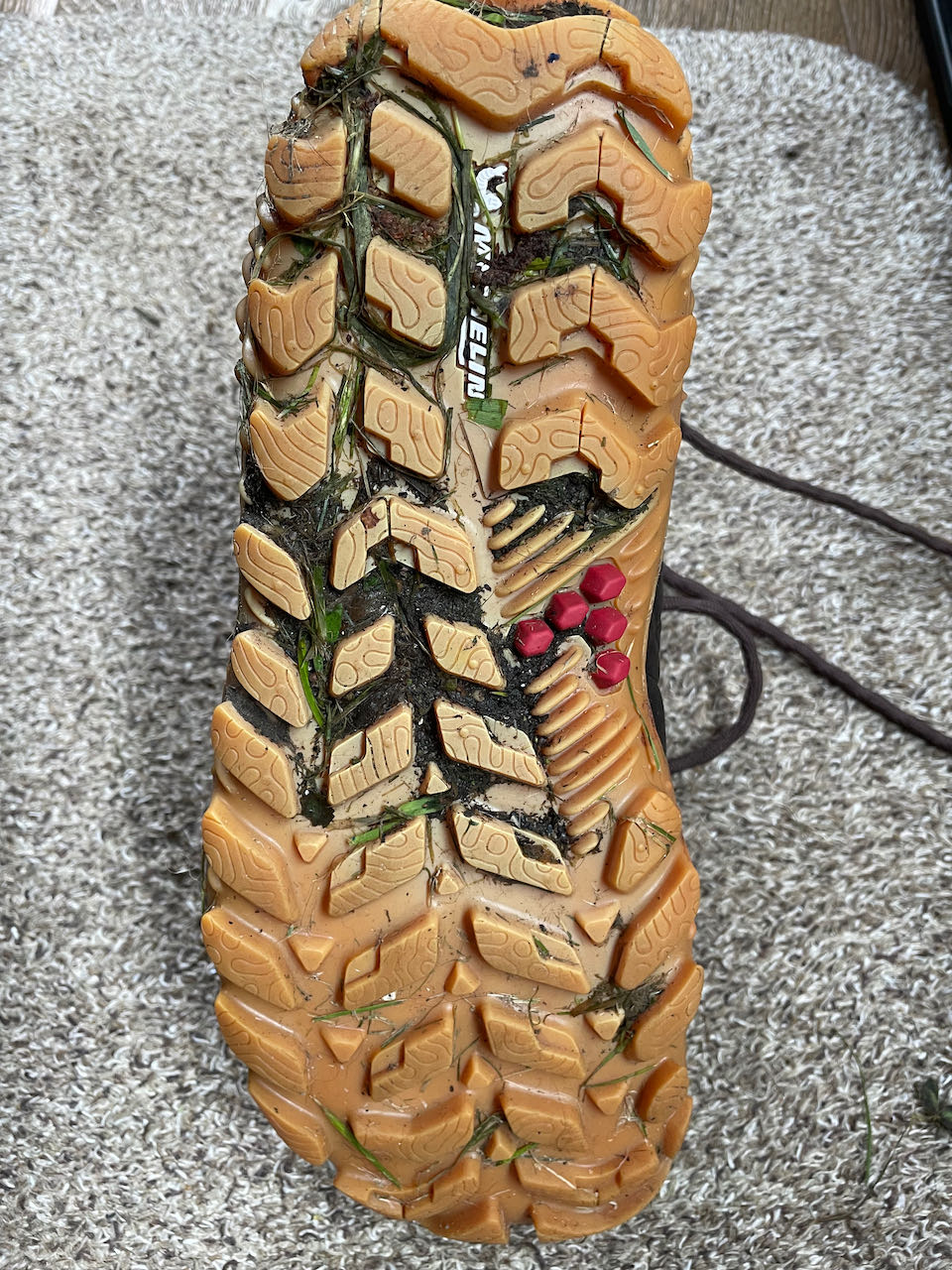 I have had these boots for just over a month now. No, I haven’t been hiking nor have I been to yon hills. I’ve been for a couple of tracking walkabouts and a few weeks out on our boat where you need good grip, comfortable study-ish boots and some kind of weather resistance. The Forest Tracker ESC ticks all the boxes so far. They are extremely comfortable out of the box. They are built a half size up but don’t be tempted to get the half size down or you will get pinching. The toes are meant to move in the toe-box. They are a bit heavier so don’t expect lightweight and don’t expect stealthy. The new ambassadors think they’re great – but they would wouldn’t they?

Price-wise, the ESC comes in at £180 which is a tenner less the the FG. This may seem expensive but are actually reasonably priced compared to the GTX’s which are variously priced from £150 to £180.

Time will tell whether my love affair with Vivo will come to an end or not or whether the ESC will ‘escape’ (yawn) falling to bits. It’s looking ok for now.

Post-script: Changing to barefoot style shoes boots will require you to condition your feet, ankles and knees as I said. Seriously. Stretch the achilles tendon and ligaments and read how to walk and run properly. A certain popular adventurer/explorer may have made this fundamental error resulting in torn ligaments after just reviewing the Forest Tracker ESC. Oooops!